Summer is almost here and that can only mean festival season is about to takeover. A few weeks ago we collated Part One of our International Festival Guide looking at a mixture of what’s on offer throughout Europe in the coming months, also if you’ve been following our ’Artists To Look Out For’ series you will know that the range and diversity of acts to catch this year is better than ever. So next up in our unmissable series is Sónar Festival, one of our much-loved times of the year when Barcelona transforms into the electronic music hub of Europe for an extended weekend of partying, festivals, lectures and seminars.

As the prospect of Sonar draws ever closer, and we select the artist’s not to miss (see here) we are of course also turning our attention’s to the numerous parties that take place away from the festival throughout Barcelona during the city’s off-week series. Like the festival itself, off-week’s events have offered an alternative platform for underground, up and coming and legendary artists alike who want to play for dedicated music heads at some of the city’s most prestigious venues. For 5 sun-drenched days in June, Barcelona plays host to some of the finest label curated parties around this summer. Once again we’ve analysed some of the best events happening in Barcelona during off-week and we have curated our own AboutToBlow guide of guides that outline where to be from Wednesday 15th June till Sunday 19st June.

Having garnered a reputation for showcasing an accessibly premium brand of underground club sounds, Jaymo & Andy George’s all-conquering Moda Black imprint has gone from strength to strength over the past few years. With a second year of the excellent Lost Village imminent and several years of Off-Sonar experience, the MB crew have become synonymous with quality and are kicking off proceedings with a typically weighty line up of internationally recognised names off the label’s roster. Last year’s team up with Santè’s label Avotre was an education in full-throttle, no-holds-barred tech-house and what’s more, the undeniably stunning confines of la terrazza makes the open air venue a must visit. In all, considering the quality upheld by this essential label, this represents a solid way to kickstart your Off-Sonar experience.

Proyectual parties tend to embody a conceptual and avant-garde thinking when it comes to production, time and care evidently goes into everything from line up curation to ideal locations and decoration. This time will be no different beside the idyllic location of the Mediterranean Sea. The main stage program includes disco selector Motor City Drum Ensemble, Detroit’s own Omar S who will most likely be spinning cuts from his latest hit album, Ghostly International affiliate Gold Panda will also perform his blend of live electronic sounds just before Todd Terje presents his completely live hour of music beside the waterfront.

The second stage vibes comes courtesy of Scottish powerhouses Optimo, smalltown associate Prins Thomas and Hinge finger head honcho Joy Orbison amongst others. Tickets are on 4th release, and VIP backstage tickets are also up for grabs head over to RA for further information on how to purchase.

This Is Hardcore: Heidi presents The Jackathon.

The loft then hosts Louisahhh, Maelstrom and special guest full on techno legend Dave Clarke whilst Lolita hosts L.I.E.S records who are effortlessly one of the hottest labels at the moment with none other than Ron Morelli, label boss headlining. Tickets are on third release now but every ticket gains entry to all of Razzmatazz’s 5 inclusive clubs. Remember don’t squander on this one, buy tickets here to get access to what intends to be one of the most lively euphoric shows on offer during Off-week.

Circoloco will take over Barcelona’s Plaza Mayor de El Poble Espanyol on the third Friday in June, with Jamie Jones headlining with a crew of some of the world’s most influential selectors. The Ibiza party brand has teamed up with Barcelona promoters LOUD and CONTACT for a party which will run from 4pm through 1am in a closed off square dedicated to live electronic music in the open air. Seth Troxler joins Jamie with iconic French trio, Apollonia, dynamic Italian mix master Davide Squillace and South African super producer Black Coffee – a line up which will unquestionably deliver the perfect soundtrack to an open air sunset. This is without doubt one of the week’s biggest parties & tickets are almost sold out so head over to RA and be quick to purchase, alternatively if you miss out keep your eyes on the event page for further updates.

Moon harbour have been pushing out consistent solid tech, groovy and upfront house courtesy of label bosses Matthias Tanzmann and André Quaas hard work and dedication. The fresh and energetic releases will be the theme of this year label showcase at Pacha during off-week sonar 2016. Matthias Tanzmann will headline with an exclusive set, followed by Andrea Oliva, DJ T, Germany duo Luna City Express, Daniel Stefanik, tastemaker Detlef, Sable Sheep, Leeds’ own Jey Kurmis and many more. Ridiculous line up which starts before midnight and ends just before the 7am sunrise next to Barcelona’s famous strip beach. Tickets are on third release and still only 20 euros entry, head here for an exciting assortment of tech house vibes.

It’s worth mentioning that in addition to overlooking the vast & stunning stretch of Catalan beach, Pacha’s Off-Week will host eight brands, labels and agencies over its duration. As well as the music, you can expect some world class eats with your beats, with Pacha’s Restaurant bringing the best vibes of Ibiza straight to your plate in Barcelona. The menu combines the best of oriental and Mediterranean cuisine, executed by head chef Emilio Gutierrez, making it the perfect place to enjoy Barcelona’s summer afternoons with good vibrations and the best cocktails with a service that will exceed your expectations. By night you can see the offerings Pacha has in store below, with all tickets available here.

Secretsundaze have moved to the stunning open air, Parc Del Forum site situated by the Mediterranean Sea. The first party in a 2-part series commences on the Friday 17th June. Secretsundaze regular Antal is joined by the return of eclectic selector Hunee who’s had an amazing year spinning his expressive sets across the genre board. Secretsundaze welcome back Midland along with Bristol based Shanti Celeste who has become a staple of the brand with her effortless musical prowess and releasing on Secretsundaze’s own imprint last summer. Also on the program is Detroit selector and one quarter of the famous 3 Chairs, Marcellus Pittman who always delivers a seamless journey through rare house, disco and Detroit techno. Dekmantel and Lobster Theremin affiliate Palms Trax join the lineup who are currently creating waves with their unique sound of hard yet colourful frequencies of techno and last but not least Secretsundaze employ P-bar’s routine DJ Nick Höppner to take care of proceedings who Relate EP became one of the most popular releases’ of 2015.

Remember the backstage pass for the Off at Forum events includes VIP access at the door, one free drink, and entrance to the backstage area in the two stages with private bar, chill area and bathrooms. The Friday ticket will give access to all the spaces of the venue on the date.

The quirky self-made and very popular Underground house and techno crew Art of Dark are hosting a party at Villa Olimpica’s ZT Hotel around a glowing pool on top of the Spanish block, which begins at 1 and continues into the night till 11pm. Catch some rays whilst highly seasoned Turkish minimal tech DJ Onur Ozer takes care of proceedings alongside highly-rated Italian selector Francesco Del Garda, German-born Laurine and AoD’s own Andrew James Gustav and Colin Chiddle. Day tickets are now on final release, or pay half price for entry before 2pm, all details can be found on the RA event page including extra tickets on the door and entry policy.

Venue : Up and Down

Detroit legend Kevin Saunderson delivers a special one-off intimate house set at Up and Down on Saturday 18th June 2016. With a daytime outdoor terrace complete with palms plus an indoor club venue kitted out with a funktion one sound system, District boasts one of the best day to night vibes available during this year’s Off-sonar. Levon Vincent takes to the stage alongside DJ Qu, Berghain regular Tama Sumo, Fred P, Aka Black Jazz Consortium, previously mentioned Antal, Jersey City’s Joey Anderson and Tama Sumo’s regular sidekick Lakuti. Tickets are still available via Resident Advisor here, don’t miss out on one of the best star-studded line-ups at Off-week.

Secretsundaze’s closing party at Barcelona’s Off-Week is highly regarded as the unofficial closing party for the whole season. Hosted in the beautiful venue that is La Terrrazza, 3024 and Royal Oak label man of the moment, Leon Vynehall headlines what is sure to be an epic party located in the picturesque hills of the Barcelona. His album Rojus has been doing the rounds to rapturous applause; expect to hear his heavily imbibed soul and funk trademark that resonate within his track to transcend thought his set. Joining him will be Panorama Bar and Berghain resident, Ryan Elliott who returns for his second secretsundaze appearance of the year at and French up and coming hardware duo Nummer, who’s live show are not to be missed all sandwiched between the Secretsundaze resident DJ’s who never falter to provide some stimulation to get things going.

Dimensions continue their launch party series in the build up to their 5th birthday with a very special Off week closing party during this year’s Sonar. Hosted at the quirky BeCool the line up includes New York techno specialist and Deconstruct’s Anthony Parasole, Soul People Music’s Fred P. AKA Black Jazz Consortium and Ostgut Ton affiliates Massimiliano Pagliara and Tobias live for a true assortment and variety of tastes which you can expect to hear at this year’s Dimensions Festival. The upstairs Room two will be taken care of by proven tastemakers and party starters Dimensions Soundsystem. Tickets are on sale now and more details can be found on their RA event page.

Regular readers of About To Blow will be all too familiar with our long-standing Elrow love affair. Having sat down with the team behind the Barcelona brand to uncover it’s success recently (read here) the party show’s no signs of slowing, & rest assured their flagship annual Singermorning Festival will be rounding off Barcelona Off-Week in spectacular style.

Boasting one of the most star-studded line-ups of the entire week in one of the most exciting venue’s tucked away just outside the city (10-15 minute drive). In true Elrow style expect props, inflatables, streamers, dancers and of course some of the best DJ’s on one of the city’s biggest soundsystem’s all celebrating the end of the week. Tickets are practically sold out but be sure to check Resident Advisor or the Elrow site here for updates. Have a look at how Elrow’s recent 3 day weekender went down at London’s Village underground only last month here. 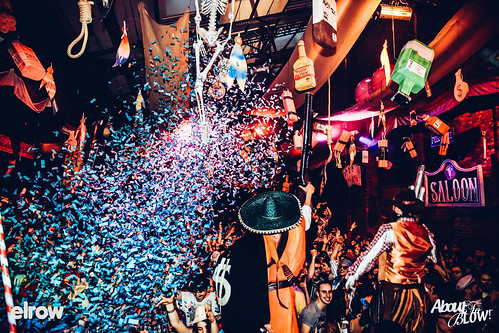