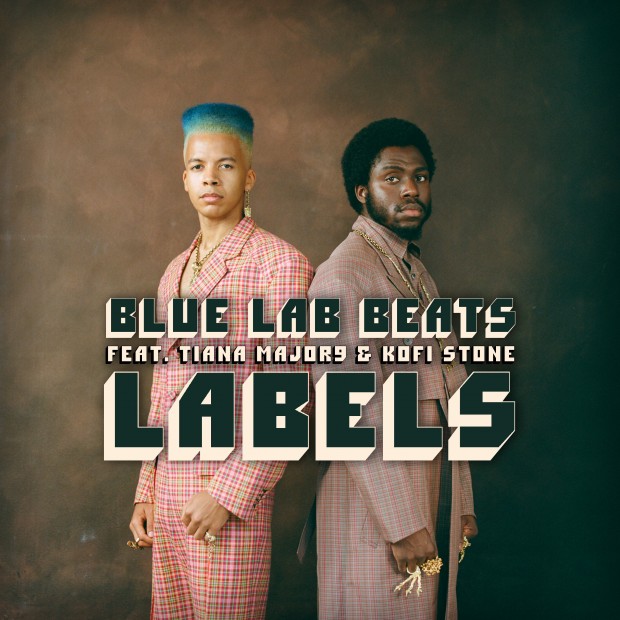 By AboutToBlow @AboutToBlowBlog · On November 5, 2021

A stunning sonic creation, ‘Labels’ combines Kofi’s slick bars and Tiana’s head-turning vocals with the smoothest of jazz productions. It follows ‘Dat It’, ‘Blow You Away’ and ‘Sensual Loving’, Blue Lab Beats’ recent hit collaborative singles with LA-based artist and Stones Throw affiliate Kiefer, and Afrobeats prince Ghettoboy, tracks that will feature on the forthcoming BLB album, out early 2022.

“Originally labels started out with my chord progression that I was sitting on for about 6 months and then I gave the rough idea to Mr DM for him to have input on.” Blue Lab Beats explained on ‘Labels’ creation. “We then built the track from there. Before getting the vocalists we wanted on this song we got Stephen Hussey to arrange the strings and record the string section and when we heard it back it honestly was so crazy to have live strings on our music. For the vocalist we wanted  UK talent on this and so we automatically hit up one of our favourites Tiana Major9. We worked with Tiana in her early recording days so we know how amazingly talented she is. Then it was down to Kofi Stone to deliver the Rap and once again when working with him we all thought “this guy is incredible!.”

Discussing her guest verse, Tiana Major9 commented: “A lot of the time we over complicate things. Especially at the early stages of a relationship. You don’t always have to rush for a label cus you think that’s the right thing to do. Learn, love then decide.”

“I was going through what I spoke about on the record so it was good to get off my chest” Kofi Stone also explained. “Working with Blue Lab Beats was a great experience. They are two incredibly talented gentlemen. I just love the musicality they bring and I felt right at home in the studio with the guys.”

One of the fastest-rising production duos in the world right now, Blue Lab Beats consists of producer NK-OK and multi-instrumentalist Mr DM. Starting out as bedroom producers, remixing tracks from A-listers such as Dua Lipa and Rag’N’Bone Man, the pair quickly grew into something far more potent – crafting a supple, wide-ranging sound inspired by the pioneers of hip-hop and the music of the African diaspora while staying true to their London roots.

With over 25 million streams and having played Glastonbury as well as supporting the likes of Roy Ayers and Thundercat, Blue Lab Beats releases such as 2017 EP ‘Freedom’, with its stand out track ‘Sam Cooke & Marvin Gaye’, or 2018’s ‘XOver’, a debut album brimming with hits including the eight-million-times-streamed ‘Pineapple’ and the acclaimed ‘Sam Cooke & Marvin Gaye’ featuring Kojey Radical and Tiana Major9, have proved how popular their sound has quickly become. Releases such as the 2019 EP ‘Vibe Central’, which has features from Grammy-nominated trumpeter Theo Croker alongside statement track ‘Hi There’, a soulful instrumental sermon that also appears on Blue Lab’s 2020 album, ‘Voyage’, brought them further success.

Tiana Major9 has previously linked up with Blue Lab Beats on 2018’s ‘Sam Cooke & Marvin Gaye’ alongside Kojey Radical. More recently she received a Grammy nomination for ‘Collide’, a collaboration with Earthgang that featured as the official soundtrack to Queen & Slim. She has gone on to make her US TV debut on The Kelly Clarkson Show which was quickly followed by a string of big TV performances including The 2019 BRIT Awards,  The BET Awards, The Soul Train Awards, The Billboard Awards, The MOBO awards (where she received 3 nominations including Best Newcomer) and most recently The Late Night Show With James Cordon show.

Arriving on the scene in 2017 with debut single ‘Stories In Pyjamas’, Kofi Stone has quickly made a name for himself with his own brand of introspective, honest hip-hop. His debut project, Nobody Cares Till Everybody Does then arrived in 2019 and featured Loyle Carner, Maverick Sabre and Ady Suleiman. He recently finished a sold out UK tour in October and released a string of 3 singles in the last 2 months titled ‘I Wish/ On The 1st Day’ and ‘Broken Chandeliers’ ft Jacob Banks. Kofi is currently in the studio creating his second project and plans to drop one more single this side of the year.

‘Labels’ is a majestic track that brings the best out of all artists involved.