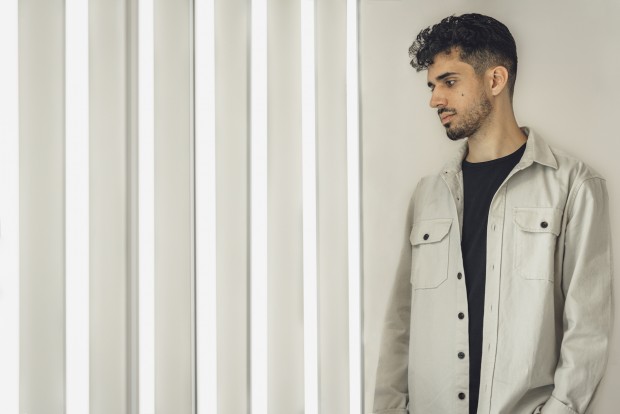 A ten-track release, Galerie is a forward-facing LP partly inspired by Anomalie’s hometown and the sense of community that it brings him. Citing a glorious genre fusion of inspiration that includes D’Angelo, J. Dilla, Brian Wilson’s Pet Sounds, Herbie Hancock’s Sunlight and Robert Glasper’s Black Radio, the record is a resounding thesis: a road map tracing how consonant styles overlap and interact.

It features no fewer than five tracks that have already been released as singles in recent months – accumulating upwards of 1.2 million combined Spotify streams in the process. The first of which is ‘Dribble’, a sparse, charming pairing of beats and synths. Then there are the spaced-out synths and plucky bass of ‘Bond’, and ‘Come Running To Me’, a bold Herbie Hancock cover of the 1978 classic that trades the original arrangement of Sunday morning woodwinds and soft, deliberate brass for an updated palette of Saturday night synths and strutting hip-hop drums. Anomalie’s most recent single ‘Hummingbird’ follows. A smooth jazz creation that arrives like a cool breeze on a hot summer’s day, it was created in collaboration with LA-based producer and violinist Bad Snacks. The LP’s final single comes in the form of ‘Memory Leaves’, this time a collaboration with the Grammy-nominated Masego, who delivers a stirring verse amidst Anomalie’s effortless melodic finesse.

The release of Galerie will be preceded by a mammoth world tour, aptly-titled ‘Galerie World Tour’, which will kick off on 18th May and take in no fewer than 26 dates across North America and Europe (full list of tour dates below).

“Galerie is a collection of musical canvases that represent my rediscovery of what it means to be excited about making music,” Anomalie explains. “I haven’t had access to a real piano since I was teenager and so the upright I got last summer plays a central role in this project, both as a creative and a sonic tool but also as an actual source of inspiration and a means to tell a story through melodies and harmony. Lastly, this is my first project to feature several collaborators and each one of them brought their own creative universe along with them, which was incredibly inspiring to witness.”

The live electronic project of Montreal-based classically-trained keyboardist and producer, Nicolas Dupuis, Anomalie shot to worldwide fame after the release of his two EPs, Metropole Part I and Part II as well as the Bend The Rules EP – a collaboration with Chromeo.  Having sold-out two world tours by the end of 2020 with his intricate four-piece live band, and performed at the likes of Red Rocks, Montreal Jazz Festival and Electric Forest Festival, Anomalie has achieved so much already as an independent artist, helping draw new and broader audiences back to Jazz in its purest form with a futuristic feel, with 2022 set to be his biggest year yet.

Ushering in a new era as an artist, Galerie is Anomalie’s largest and most profound body of work to date.