Rich NxT is an OG FUSE London resident and an integral member of the FUSE sound which, having started as a Sunday party in 2008, has gone on to establish itself as a key player in the minimal house domain. The last two years have seen Rich NxT champion this sound further through his own imprints NxT records and What NxT?, and this weekend see’s the London producer head back to where it all began, at the newly refurbished 93 Feet East for a label showcase and collaboration with friends and respected Frankfurt collective Freebase, lead by Chris Wood and MEAT.

Friends for many years, Rich and MEAT first linked up through the London party scene, when MEAT used to travel to the capital regularly to play Mulletover with Geddes. Their friendship was solidified when Rich started NxT Records and, by coincidence, it was distributed via FREEBASE. Although the legendary record store/distributor (operating since mid-90s) closed it’s doors shortly after, the pair remained close and with FREEBASE hosting events at the legendary Robert Johnson (regulars include Seth Troxler and Loco Dice), they invited Rich down to play in July last year.

The night went brilliantly and Rich has followed up by inviting them to co-host his label party on April 29. Perhaps auspiciously, the new look 93 Feet East has a similar feel to Robert Johnson – a cool stripped back set up – just a dancefloor and a DJ booth.

Ahead of the show, ATB got the chance to catch up with the three and as you can imagine, it made for great listening considering their history in the dance music industry spans over two decades. Interesting topics like the demise of the FREEBASE record store, insights into the relationship between label and distributor, links between the respective London and Frankfurt scenes and of course plenty of historical, rave related reminiscing. 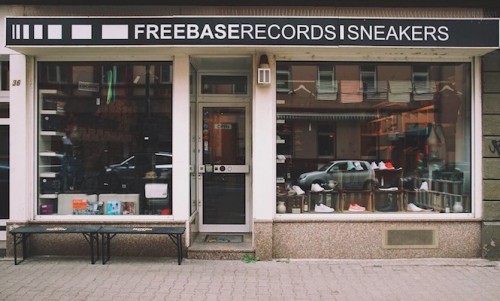 Freebase Records in Frankfurt, before closing its doors in June 2016.

We join the conversation as Rich discusses the aftermath of Timewarp, which took place over the first weekend of April.

Rich Nxt: I was saying to MEAT, Chris, Time Warp and Robert Johnson must have been quite a big weekend.

Chris Wood: Robert Johnson was amazing. I didn’t go to Time Warp though as I played three times this week already and I wanted to relax and have a little bit of time with my little boy. When you go to Time Warp you are always destroyed for two or three more days [laughs].

Rich NxT: Yeah it’s a pretty mental one from what I hear.

Chris Wood: You start Saturday evening, then you do not have a rest, then you go to the after party, then you go to bed Monday morning. If you’re old, you’re destroyed. Yeah, I am old [laughs].

Rich NxT: MEAT did you go to Time Warp? 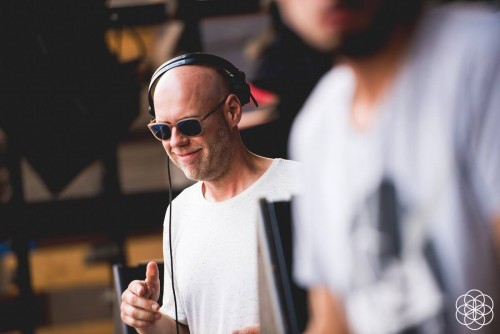 Meat aka Carsten Schuchmann founded the well known Freebase Recordshop in Frankfurt/ Germany at the beginning of the nineties.

MEAT: Yes the day before.

Rich NxT: How long has Time Warp been going?

Rich NxT: So you had FREEBASE going most of this time?

Rich NxT: Was that when it first started?

MEAT: No, it was when he did the record store in Mannheim, we had a fusion cooperation and re-named it and it was a FREEBASE store from that point on. So I worked for almost 2 years in Mannheim, but then we split. But we’re ok together.

Rich NxT: So, I’m just trying to remember how we all met. Carsten [MEAT] I think you and I met at Mulletover in London and then the next time was in Croatia when Rob [Star] and Geddes were doing parties over there. We had good fun from what I can remember.

MEAT: Of course, I’m always having good fun when I’m in Croatia and London. Mulletover were great parties! Also continuing on after at the Kubicle Toilet parties.

Rich NxT: That’s right I have some brilliant pictures of those times. Some of the pictures that the photographer Nick Ensing took of those times. I think it was you, Hector, Jamie Jones, Mr C and the residents.

Chris Wood: There’s pictures from Carsten playing at the Toilet?! 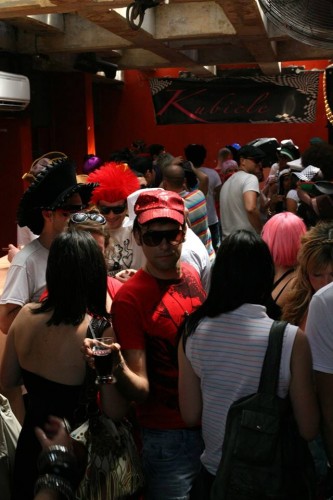 Rich NxT: Yeah there are some brilliant ones. So colourful! He put an album on facebook not long ago just documenting things and it brought back some really good memories. I had some pictures from Croatia of you playing table tennis in the days before the festival started and I remembered you played b2b with Einzelkind on that boat.

Rich NxT: How did you and Chris meet?

Chris Wood: So long ago.. We are married now since 25 years!

MEAT: It was like a floating thing. We have known each other for a long time. In the beginning it was just more like ‘hey, hello’ – something like that.

Rich NxT: I heard a lot about Frankfurt back in those days – good strong networks, parties and after parties. I guess that’s what really makes the scene there today.

Chris Wood: In Frankfurt in the past, it was definitely one of the techno capitals. Some new stuff is happening now.

MEAT: We’ve had some great after parties of course you know of Rich. You ended up also in my special room [laughs], even if I wasn’t there.

Rich NxT: I think you’re right! Well, that’s what gives all these cities their roots, the fact that they have this amazing history, the networks of people are still there.

Rich Nxt: So one of my labels NxT Records, I went to play for Dennis Kusi at Parker Lewis about three years ago approximately – at the time I was thinking about starting a label as I didn’t really know much about distribution then – I probably still don’t know that much – and he mentioned FREEBASE as a possible way to do it. I think at the time I was trying to get a P&D deal somewhere but I think what I learned from the chat was that I didn’t necessarily have to go down this road. He said if I was working with someone I trusted, who has really good ideas and connections, then you can go down a fund-it-yourself route and work with an independent distributor who may know your scene a bit better. I think it worked quite well for that release.

MEAT: Absolutely! Well, unfortunately we were almost in this period of closing when we begun working with you. It had nothing to do with business, but after 22 years our passion went away in a way. But I think the cooperation with you and all our labels, was really easy. It wasn’t like we needed a big contract. You sent over the stuff, we do our best, you know how many you send, and you’d get paid for it. It was very easy and simple.

Rich NxT: For me not knowing much about it, it was just really easy to do. You made it easy, it was great. Did you feel like FREEBASE was a bit different to other distributors in the way you worked?

MEAT: I think we were just a small record shop that is also distributing stuff we like and tracks we will support. At first we need to know the persons who are running the label – it makes things easier. It’s all about trust. We were not fans of doing big contracts like ‘we need this and that’. I preferred to ask labels how much they wanted to sell the record for or tell them what price it was possible to sell it for and then get on with it. We wanted to keep it simple. I think you can do this if you have a couple of labels, but impossible if you have hundreds.

Rich NxT: It was really nice working with you guys as there was already the trust there. At first when I got in touch, I didn’t even realise it was you. Remember? It was only after I emailed that it clicked. It was a nice surprise. You’ve got a lot of experience running a record store, do you have any advice for anyone thinking of doing the same?

Chris Wood: [laughs] Advice? No one really. It’s hard nowadays with all the download possibilities and all the people playing digital. It’s not the business as in the past. If you want to run a record store, start with something small and then you can see what you can make out of it.

MEAT: It takes a lot of passion. I am now really happy that I stopped with the record store, I’m now free in my mind, free what I can do. I was just tired after 22 years and felt like I couldn’t do it anymore. I felt like [if I continued] I would start to hate music and start to hate vinyl.

Rich NxT: You’ve always been DJs, so I guess that’s the priority. As you said Chris, if you’re going to do it, you need to keep it small.

Chris Wood: Yes keep it small and remember you have to be there every day and when you start you can’t have so many people working for you. This means you don’t have so much time to go to the studio. If you play at the weekend, you will be a little bit tired during the week. It’s hard, but you can do it if you want to. Start with a small shop. Figure out the location and whether you have enough people coming to your shop. All these things are very important.

MEAT: Rich, I wonder: we’ve had quite a close-knite crew with FREEBASE over the years and you’ve certainly experienced something similar with Fuse. I wonder if you’ve ever felt like developing a collective type atmosphere with NxT Records?

Rich NxT: To be honest, not really. It’s not really about creating an industry or anything like that. It’s just about supporting the music and artists I like to play, rather than having lots of showcases and things like that. For me the party with you guys is more like a celebration of the work we’ve done together, the fact that you had me over at FREEBASE @ Robert Johnson last year, so having a nice return leg in London where obviously you both have lots of friends and have played a lot before.

MEAT: I am really looking forward to the parties. I think Geddes is coming and some other friends. I’ve had so many good times in London, I’m really happy to be back.

Rich NxT: The soundsystem is sounding really good at 93 Feet East too. Did you ever come to any parties there? It’s right on Brick Lane and has a refurbishment around November time. When I walked in at the opening night drinks I thought ‘Wow this looks like Robert Johnson’. They’ve stripped it back, they have the symmetrical booth in the middle, the wooden floors. A nice room with a nice soundsystem – a bit like the old T-Bar. You can hang out a bit, it’s got something for everyone. It’s a nice day out. 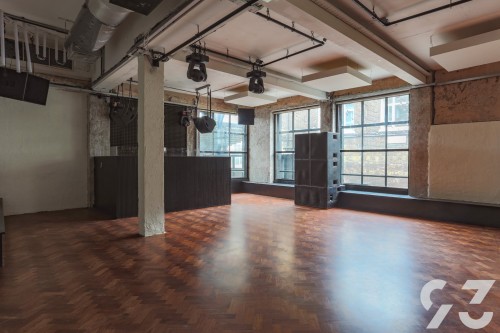 Chris Wood: and we come early on Sunday. We have the whole day to walk around a bit.

Rich NxT: Did you ever meet Annie Errez before who is playing with us on Sunday?

MEAT: A couple of years ago at Mint Club.

Rich NxT: She’s a really great DJ, a vinyl lover player and collector someone like yourselves as well. I think there is going to be a nice chemistry.