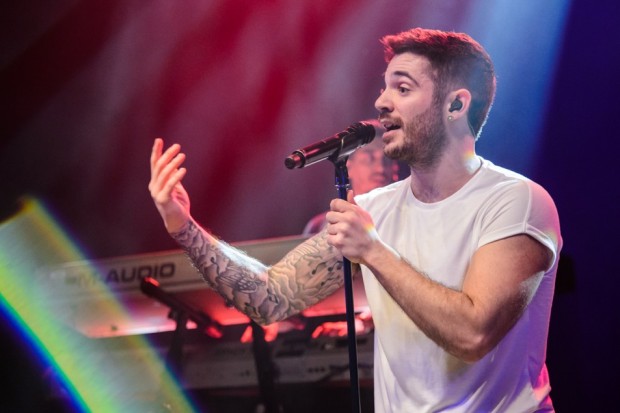 Emerging US star Jon Bellion touched down for his first of a string of UK shows at the Shepherd’s Bush Academy last night – and promptly blew the roof off the place.

The 26 year old singer, songwriter and producer has been nothing short of a cult phenomenon in the US since his breakout hit ‘All Time Low’ last year. Now the New York native has landed on our shores with a re-release of that track, strapped with a guest feature from Stormzy – a serious coup considering it’s the first time the UK’s favourite emcee has featured on a US track.

Jumping into UK consciousness via a co-sign with Big Mike has certainly drummed up interest over here, but in truth Jon had already sold out this, and the rest of his shows in Manchester, Birmingham, Dublin and Glasgow. Mixing influences from hip hop, indie and soul whipped up in a high-energy style, there are similarities in terms of the mega-watt energy that rolls off both Jon and Stormz, but last night was a massive statement from the UK that Jon’s already seriously embraced in his own right.

First track ‘He Is The Same’ had the crowd bouncing about in joyous pandemonium and Jon looked genuinely moved; for about a second as he then launched into ‘All Time Low’, punching at his synth with obvious enjoyment.

Jon’s a singer and songwriter first and foremost – he’s already written for Eminem and Rihanna – and it’s the real stadium quality of his songs like ‘Guillotine’ and ‘NY Soul’ that grab your attention on that level; Jon shines with this good-nature and his working-guy done good demeanour; its his technical ability though that also needs a mention.

Finishing off with ‘Jim Morrison’, Jon had the crowd baying for more – they hadn’t left by the time we did, literally about a hundred people were crammed against the railing to catch a final glimpse of him from the back entrance.

Jon’s smile after the first track of the night came with a little confession: “Before we came on stage we didn’t know if y’all would be into this shit, I didn’t know if you would fuck with us…” Jon doesn’t have to worry – the UK is into this self-made artist because he exudes a manner that’s easy to respect; he’s as real and as self-made as the rapper that’s graced his track.