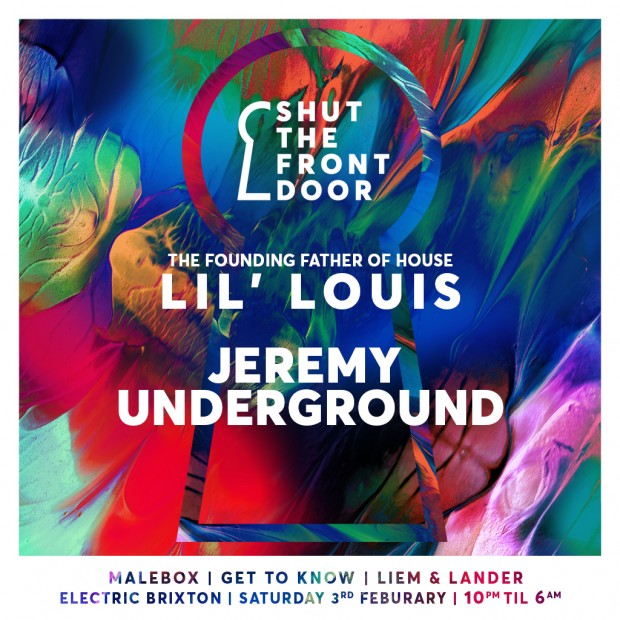 By AboutToBlow @AboutToBlowBlog · On December 7, 2017

After 5 years in the game, Shut The Front Door have progressed from humble beginnings in it’s birth city of Nottingham, to established party starters at venue’s across Brixton and have wasted no time in keeping things moving, having locked in pioneers Lil’ Louis and Jeremy Underground to kick-start their 2018 series. February’s fiesta at their new home, Electric Brixton, celebrates the brand’s growth and is their biggest show to date.

Shut The Front Door’s line-up has been carefully curated to ensure a night immersed in House & Disco. Lil’ Louis, the first DJ to mix Disco in a club environment, performs for the first time in 2018. Undeterred by permanent ear damage, he’s got six back-to-back albums in the pipeline and pledges to play his exclusive material ‘twice as loud’ if necessary, allowing the audience to truly ‘feel’ his music.

Jeremy Underground also makes his 2018 debut after headlining a series of events at the forefront of underground House. Head of label My Love Is Underground he’s the force behind ‘putting talent on wax’, collaborating with DJs including Brawther and Tristan Da Cunha. After crate digging through decades of electronic music and identifying golden-era records, Jeremy’s back in London on form. With #saunagate behind him the Parisian pioneer is prepared to spin strictly the best Disco and 90s-inspired House.

Shut The Front have set the standard high for 2018 as they embark on a new chapter at Electric Brixton. On the 3rd of February a house party atmosphere will be brought to a club setting, with two central figures in House uniting for the first time to share their most personal tracks.

Rolling till 6am, tickets are available here. Check out the brand’s recent aftermovie below.