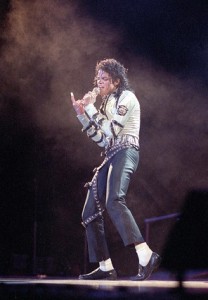 It seems to me that whenever thoughts, issues or area’s of much debate arise, i am seemingly away from any means of communicative apparatus to postulate a coherent ‘argument’ on the proposed subject.

As we fall into the summer months of Britains emphatically erratic summer conditions, much has slipped through the grasps of relevance for me to now run through. However, one topic close to heart must be assorted over…

On June 24th, the earth gasped and seemed to pause in a coherent overwhelming moment of shock, and quite equivocally the century’s biggest at that: The death of a superstar (there is of course, ill reason me to identify the obvious). Whilst this is a topic that is clerically limitless it seems more than poignant for me to look at what should matter most…what exactly the king of pop meant to music, identity and culture that we know of and are embedded in today.

The worlds biggest selling album by considerable distance is of course 1984’s masterful “Thriller”, which was (like Off The Wall, Bad and Dangerous) largely written by Michael himself, so before the cynics attempt to argue his status as music’s greatest, take food for thought in that he wrote 90% of his biggest hits himself…

Whilst i have an infinite amount of memories to recollect from my childhood (like many of us will have) which evolve are MJ, it was his 1997 HIStory tour at Wembley Stadium which, at the tender age of 8, i can remember walking alongside my mum towards the Stadium in a pandemoniously euphoric hoard of MJ-lovers alike, one of my first clear memories and one of which i know will stay with my forever, a true piece of history in itself that I consider myself honoured to have been apart of.

What (as all the Media hoo-ha gradually begins to demise) needs to be concluded at least for the time being is that this was truely a sad demise and real tragedy, the true dissapointed was that it took his death to make the world stand up and remember how gifted a performer and world-star MJ really was.