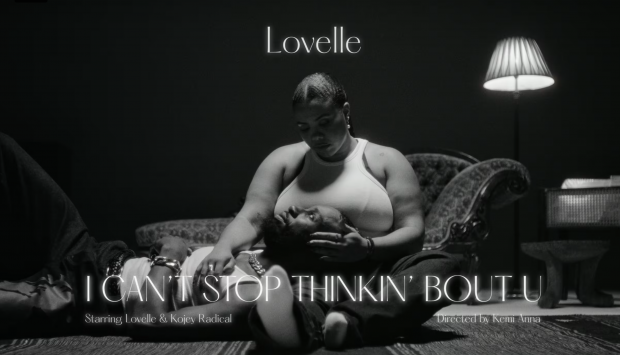 By AboutToBlow @AboutToBlowBlog · On November 17, 2022

Written by Lovelle and Grammy award winning songwriter Ryan Ashley with production by Fergus Martin, ‘I Can’t Stop Thinkin Bout U’ was penned during lockdown, in an effort for Lovelle to overcome a recent heartbreak.  Propelled by her sensual, impassioned vocals, it’s a track that is steeped in emotion. The heart-wrenching, monochrome official video – directed by London based filmmaker Kemi Anna Adeeko – features Kojey Radical playing the part of Lovelle’s love interest. A long-time friend, he was the only person she envisaged taking up the role. Her first release since her 2020 debut EP Therapy, ‘I Can’t Stop Thinkin Bout U’ has already garnered early support with a ‘First Play’ premiere by the legendary DJ Target on his BBC 1Xtra on his Tuesday 15th November show.

Coming from a musical background that saw her begin to sing during her earliest years in school, the South-East London hailing Lovelle went on to attend the The Mick Jagger Theatre and Sylvia Young Theatre School to better her talents, before being discovered on MySpace by an A&R, having uploaded her demos onto the site. Since then, Lovelle has gone on to be supported by radio tastemakers including Trevor Nelson, Twin B, DJ Target, Dj Ace, Annie Mac and Fearne Cotton, finding a fan in John Legend, whilst going on to open for the likes of Miguel, Bob Sinclair, Keri Hilson and brit winner Becky hill, who she also opened up for at the Brits.

Away from music, Lovelle is also signed to BRIDGEMODELS which has led to endorsements with the likes of Asos, Savage x Fenty, Pretty Little Thing, New look, Bravissimo, Reebok, Adidas and Nike. She made her debut at LFW 22 – walking for Karoline Vitto alongside Alva Claire and being featured in publications such as VOGUE, DAZED, I.D, THE FACE, GRAZIA and HYPEBEAST.

Her first release in over two years, ‘I Can’t Stop Thinkin Bout U’ is the start of an exciting new chapter for Lovelle.