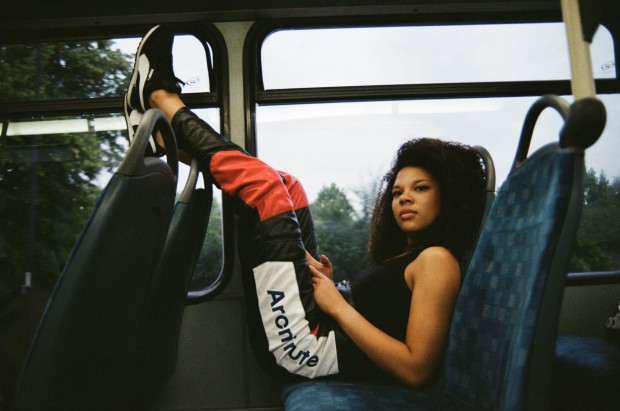 By AboutToBlow @AboutToBlowBlog · On October 7, 2019

Jaguar is a broadcaster, journalist and DJ. Forming part of the music team at BBC Introducing /and BBC Radio 1. Jaguar also hosts the Mixmag Lab every Friday whilst holding down her own show on Reprezent Radio from it’s South London studio.

Last year, the young DJ caught the eye of supreme selector, The Black Madonna, who mentored her, as part of Smirnoff’s #EqualisingMusic programme. With momentum building she has since played sets across the globe at Lost Village Festival, Glastonbury, Printworks, Dimensions, Leeds Festival and multiple sets for Radio 1 in Ibiza. She is a prominent activist in the LGBTQ+ community celebrating diversity to a worldwide, conscious audience, in an era of cultural awakening and is fast becoming a growing influencer in breaking new dance music talent.

Having also had the honour of being announced as a resident for the new season of the new-look Warehouse Project season in Manchester, we caught up with the 24 year old to discuss the significance of being recognised by an iconic institution, her love for radio, being mentored by The Black Madonna and what else she has to look forward to ahead of a hectic winter period.

Hi Jaguar, great to have the chance to talk with you today! You’ve certainly had a busy summer, can you tell us some of the highlights for you?

It’s been one of the best summers of my life (so far)! It’s cool to be able to look back at the year and see real progress being made. There’s so many highlights: I DJ’d in Malta for AMP Lost & Found back in May which was so much fun and felt like real validation for me as a DJ; I played 3 sets at Glastonbury which was amazing; I made a documentary for Radio 1 and 1Xtra about LGBTQ+ clubbing spaces which was super interesting; and most recently I hosted this year’s DJ Awards in Ibiza – an incredible night!

Your career really kicked off when you were at uni right? How important were your student radio days in getting you to where you are now?

The first thing I wanted to do when I went to Leeds Uni was try out student radio! I’d heard from some friends that it was a lot of fun, so went to the welcome meeting and applied for a show at the beginning of First Year. I ended up hosting a Friday night show called Dangerous Jag (I die when I hear that name now lol, but you’ve got to start somewhere, right?!).

Leeds Student Radio was incredibly important in the development of my professional career. I got stuck in straight away – I’d spend hours preparing the music and scripts for my shows, and was on the committee in my Second and Third years. I was able to use the decks and learn to DJ, and I even started putting on club nights and gain promoting experience. I also made some of my best friends through student radio (many of whom I work with today!) I was addicted to the buzz it gave me, and it gave me a taster of what it’s like to work in radio and set me up nicely to apply for an internship at Radio 1 and 1Xtra which I did in 2014. That internship was my first introduction to the BBC and the professional world of radio – I remember working with Annie Mac for the first time and being so starstruck and in awe. From that internship I was able to build on my ties with the BBC, and in 2016 started working with BBC Music Introducing in Sheffield. I’m now a presenter of Introducing in Beds, Herts & Bucks and a part of Introducing’s central music team. So yes, I’d say student radio set me up very well!

You have just co-hosted the DJ Awards in Ibiza, congrats! If you had to pick a favourite winner that you’d been wanting to meet a while now, who would it be and why?

It was a bit of a pinch myself moment – but I loved every second of hosting the DJ Awards, and I’m pleased to say it went smoothly! I have to shout out Graham Sahara who I hosted the event with, we had a lot of fun. All of the winners were great, but it was pretty surreal to give Carl Cox an award and welcome him to the stage. He’s an absolute legend, and the nicest guy ever!

The Warehouse Project have just kicked off their season at the new venue of which you’re now a resident for. What does it mean to you to be a part of such a historical event series?

When I received the email about my WHP residency I was so excited! I used to go to WHP when I was at uni, and was always blown away by its scale and incredible line-ups. It feels like a real honour to be on the line-ups with a lot of my favourite DJs, and join that legacy. My first gig at the opening party was a lot of fun, and I cannot wait to go back for the Halloween gig I’m doing on 2nd November and then back again on 7th December!

The Black Madonna mentored you as part of Smirnoffs Equalising Music pledge, how do you feel this changed your career?

Spending time with The Black Madonna was a dream come true! I applied for the SEM scheme on a whim, but never expected to get through and for The Black Madonna to select me to be her mentee. The aim of the campaign is to drive the industry to a 50/50 gender split and I personally really benefitted from the project. I’m so grateful to Smirnoff and The Black Madonna. We spent a day around the decks, where I learnt a few new tricks, as well as some Logic production training. We also went record shopping together and then The Black Madonna invited me and Kiia (a DJ from Bristol who also was on the scheme) onto her Radio 1 Residency show. Obviously it was an amazing experience, but I think what I got out of it most is the confidence it gave me in my abilities as a DJ and tastemaker.

How much of a change have you seen within the industry as similar projects are rolled out within the scene, do you think it is working?

I think projects like SEM are really important in achieving equality and diversity. It’s really enabled myself and others to build a network with other female and female-identifying DJs. I still look at some line-ups and can see how it’s very much a boy’s club, but I think highlighting and speaking out about this issue is necessary, as it opens the eyes of a lot of people who may not have acknowledged it in the first place. There’s still a long way to go, but I think in the last few years we’ve made good progress! If everyone makes a conscious effort to include a diverse range of people in everything they do (this applies to gender, ethnicity, sexuality – anything!), then we’ll get there. It’s just a case of getting those people who have influence to make a change.

I currently host Introducing in Beds, Herts & Bucks which is Thursdays 7-8pm &  Saturdays 8-9pm on BBC Three Counties Radio. We have an incredible team and we’re super passionate about building up our artists and giving them opportunities. Some of my favourite acts we’ve supported this year on the show have included JGrrey, Sam Girling, Byfyn, Tibasko and Jay Lewn. I also host a bi-weekly podcast called The Hot List which is available on BBC Sounds – it’s basically my rare finds of new music I’ve found on BBC Music Introducing that week and is another platform where acts can get played and get exposure.

Who do you have lined up for the Reprezent shows? Any standout guests you’ve been wanting to get on for a while?

My Reprezent show (every other Saturday night 8-10pm) is very much the home for my DJ project and has been for the past two years. I’ve had some incredible guests on recently, including CC: Disco!, Elliot Adamson, Louisahhh, and Georgia is on the show this weekend!

Looking ahead to the future now are there any specific projects you want to get under your belt?

My plan is to keep pushing my broadcasting, and keep bringing through as many undiscovered artists to the forefront on the radio. I did my first dept on Radio 1 this year, so I plan to make that a more regular slot in the future for sure.

What artists would you say are about to blow up over the coming months?

There is SO MUCH great music out there at the moment. Here’s some that I think will be huge…