By AboutToBlow @AboutToBlowBlog · On December 9, 2011 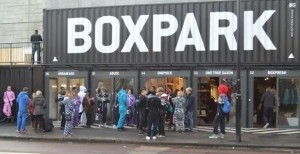 People of Shoreditch hold tight, OnePiece store is opening on 1st Dec in the revolutionary retail site known as Boxpark over in East London. As the worlds first Pop-Up Mall, its a shopping experience made up of 60 customised containers and its doors have been open to revellers for a few weeks now, however this unique house in the hub of hispter town opened its doors to celebrate the new and revolutionary Onepiece store for the first time last weekend.

If your unfamiliar to what exactly the Onpiece crew are offering, here’s a snip of background info for you;

It was one early Sunday morning in 2007, Henrik, Knut and Thomas, three Norwegians in their twenties, fantasized about the ultimate chill-out wear that would be perfect for a lazy day at home.
They all agreed on the merits of the sweatsuit for recovering from a night on the town. “But without the tight waistband and the pressure to go jogging,” Thomas said. Knut had been staring at a light bulb when, eureka, it all became clear:

“Why not sew together a hooded sweatshirt and a pair of sweatpants? Let’s make it so big that no one in their right mind would think of working out.”

“If we can skip the waistband, I’m all for it,” said Thomas. “But how are we going to get into it?”

“No sweat,” replied Henrik, “we’ll just put in a big zipper.”
And with that the OnePiece Jump In was born. The three friends dropped everything and invested all their savings to realize an idea they believed was unique and brilliant. They made the loose-fitting, all-in-one hooded sweatsuits in soft, thick cotton fleece in a wide variety of colours and patterns. 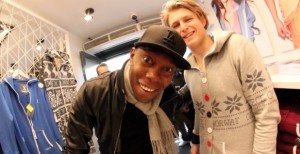 In the build up to the store’s grand opening, they were even pelasured with the presence of rapper, song-writer and producer Dizzee Rascal who stopped by to check out the store last Saturday. He chilled with the team and picked out his favourite designs much to everyone’s amazement.
Even as the OnePiece wave hits country after country, celebrities also seen sporting a OnePiece includes Justin Bieber, Lady Gaga, Rhianna, Usher, Jayden Smith, Kate Moss, Paris & Perez Hilton,  Paramore, Pink,  Agyness Deyn, Pixie Geldof, Nick Grimshaw, Jude Law and Sadie Frost.
As the first store of its kind in the UK, its open seven days a week and is well worth checking out.
BoxparkOnePieceShoreditchVice
Share Tweet