Pukklepop is Northern Europe’s rain-less answer to Glastonbury without the muddy wellies and performer politics. Every year it boasts a powerful line-up for the happy-go-lucky Scandinavians, die hard festival go-ers, and the Belgium blondes.

After 2011’s disastrous and freak accident whereby a stage collapsed as a result of a whirlwind, you would think the tainting festival ‘floppage’- such as the cancellation of 2012’s Creamfields or the catastrophic boarderline fuck up of the centrury bloc, Would mean a mediocre following year. This was not the case. 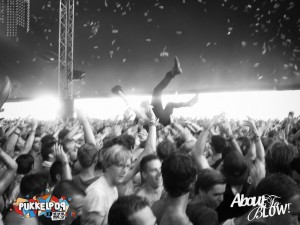 As there was no UK Glasto this year (due to the London olympic) PP offered an alternative with some of our favourite DJs and artist such as,

With a broad mix of electronic and organic musicians artsist there was a different vibe to the well known British formula but still managed to keep people stepping till the early hours.

The high-energy performances of the Major Lazor team where caught by our cameras so expect to see crowd surfing, hamster balls and inflatable crocodiles. Odd Future managed to match the adrenaline by bringing the heat and cooling the audience with a host of highpowered waterguns. Domo and MikeG performing material from their own mixtapes and, as usual, ending on the Earl tributes to set the crowd alive. However the most surreal moment was the 3-minute silence whereby everyone came to a stand still at 3pm, clasped hands and closed eyes. The memories of the pervious year were obviously still fresh in the people’s minds and it arguably brang the attendees together as the levels got pushed as the party continued till 3am.