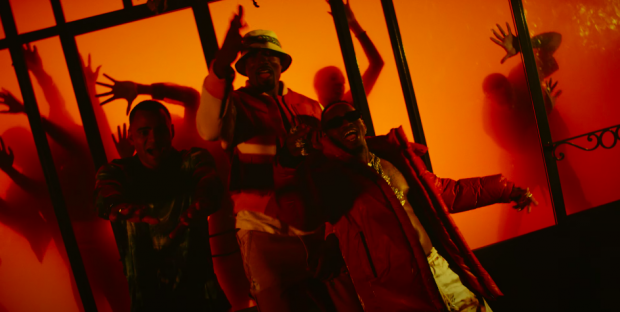 By AboutToBlow @AboutToBlowBlog · On December 6, 2021

Named after a motto that draws inspiration from the artists’ African influences, ‘Tayari’ - meaning “Ready” in Swahili - is propelled by infectious Afrobeats rhythms and vibrant vocals, and also see’s Serge sing in Spanish for the first time, having previously delivered his vocal in French. The slick accompanying video, shot in France and featuring all three artists, perfectly captures the track’s infectious Reggaeton-infused energy.

Discussing the tracks creation, two-time Grammy winner Mohombi explained: “After a couple of years of lockdown, global panic and uncertainty, the time is right for a song like ‘TAYARI’. The song is about being “Ready”…Ready to enjoy every moment. Ready to celebrate life and live it to the fullest. When I composed this song I thought that together with Serge Ibaka & Diamond Platnumz it would be perfect, and hopefully a game changer. I’m very happy about the outcome. Are you “Tayari”?”

Serge’s fourth single release to date, it follows the tremendous success of debut release ‘Champion’, a platinum-certified collaboration with French rap superstar Ninho, and his further link-ups with Tayc and Guy2bezbar on ‘LEGGO’ and ‘Rumba’ respectively. All four tracks will feature on his forthcoming album ‘ART’, Serge’s debut project which is set for release early next year, and has been years in the making. Crucially, ‘ART’ is the chance for Serge to return to his roots and showcase the many talented artists from across Africa to the world, explaining “Art is a message, for everyone,  for children, to encourage others to give back. Through music, I meant to send a message and show what I’ve done, what I’m doing and what we must continue to do.”

Before he became a NBA star worshiped by millions of fans, Serge Ibaka was a child of Africa. Born in Brazzaville in the Republic of the Congo, he then moved to Spain to work on his basketball game and in 2009 made the big jump to start his NBA career. Since then, he has established himself as one of the league’s top players, but Ibaka’s chief mission is to have an impact off the court, and specifically help the children of his country of origin. Outside of basketball, he is committed to helping those in need through the Serge Ibaka Foundation and decided to use another passion as a vector of communication: music.

Diamond Platnumz is a Tanzanian bongo flava recording artist, dancer, philanthropist and businessman. He is the founder and CEO of WCB Wasafi Record Label, Zoom Extra and Wasafi Media, and became the first Africa-based artist to reach a combined total of 900 million YouTube views.

Mohombi is a Congolese-Swedish musician, singer, composer and dancer who grew up near Stockholm. Starting out as a member of the Swedish hip-hop group Avalon, his debut solo single became a worldwide hit, charting in the ‘Top 10’ in several countries, and was followed by his debut studio album MoveMeant. His biggest moment to date came in co-winning a Grammy for his work on Pitbull’s 2016 album ‘DALE’, and his writing work on the iconic 68 x platinum J Balvin record ‘Mi Gente’ earned him his second Grammy.

Hoping for his fourth hit single in quick succession, ‘Tayari’ is indicative of Serge Ibaka’s burning desire to take his music career to the next level.