Spring Breakers; the film that’ll make you like Skrillex

By AboutToBlow @AboutToBlowBlog · On April 8, 2013 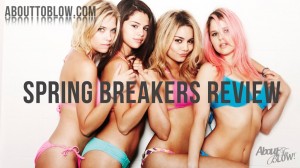 America’s teenagers boosted Spring Breakers into huge profit margins on its opening weekend, expecting to see their favourite teen actresses dancing and prancing around. They have been surprised and horrified, and something cruel inside me revels in this. Not to say every teen has splurged out on a twitter rampage, the response has been polarising amongst audiences of all ages and critics alike, something director Harmony Korine will probably never escape.

Ever since his directorial debut, Gummo (1997), he’s been praised as a visionary – even taken under the wing of the never-easy-to-please master filmmaker Werner Herzog – and condemned as a degenerate. I hesitate to label this as his “most accessible” film as many are, if we need a term, I prefer “least experimental, most refined and life-like.” Do girls usually explore the seedy underbelly of society on holiday, bump into the likes of James Franco’s (incredibly performed) Alien, and rob people at gunpoint? No, but life-like in the sense the emotions and time-loss in this drug fantasy escapade are pretty spot on. The editing is poetic, flashing back and forth in time rather than relying on surprising plot points to maintain audience interest. The effect portrays a sense of danger and chaos and excitement that are authentic and specific to a certain age and demographic, which Korine, now 40, has somehow captured and understood unlike many critics around that age.

Most critics are in the realm of 90s “good taste”. Challenges to “good taste” are never welcomed, but eventually impossible to ignore. Korine isn’t always great, but he deserves to be realised for his innovations and art within film. Not since Martin Scorsese’s treatment of violence in film classic Raging Bull (1980), has someone explored a controversial subject with the unspoiled balance of celebration and condemnation. It’s a film about bubble-gum coloured surfaces, a lack of depth and value, but also pure hedonistic joy that we in our youth long for as the world around us becomes grimmer and more artificial.
I’m almost certain, and definitely hoping, that in a decade or two, film students will pick up texts that retrospectively and rightfully praise Spring Breakers for its unprecedented intelligence, affection and skill. After all, it usually takes critics twenty years to understand Hollywood god Francis Ford Coppola’s genius.

Also, if there was ever a (drug-free) experience to make you appreciate Skrillex, this film is the one…